Return to the Ionian Sea

I flew to Corfu with H from BER and stayed overnight at the Corfu Holiday Palace near the airport. The next day H got a transfer to the port to join her ship. I rented a car at the airport. For dinner, I had the inevitable ouzo, Greek salad, and moussaka at Café Kanoni. The fabulous view was spoilt only by the roar of planes landing on the runway far below. After another night in the cheaper Corfu Hellinis hotel, I set off to the ferry to take me to the mainland port of Igoumenitsa. After a drive south through mountainous scenery I reached Preveza and yet another hotel, the Avra on the waterfront. From experience, I knew that the better places to eat are to be found back from the waterfront and I had a nice grilled fish there. The stop in Preveza was not essential, but I wanted time to deal with any problems should Graptolite turn out to be uninhabitable. In the morning there was just a short drive through the Aktio tunnel to Cleopatra Marina.

I was a bit apprehensive about what I would find with Graptolite as she had been left untended for three years. The teak deck was slippery with green slime and Sahara dust and had planks lifting in places. Fortunately, there were no families of refugees living aboard. I had joked, before going, that there may be mushrooms growing out of the upholstery. There were no mushrooms but there were wasp’s nests and some very odd-looking plants resident in one of the gloomy cabins. I thought I heard “Feed me, Seymour” so I’m keeping well away from them. The rest of the week was spent hauling very heavy dead lead-acid batteries to the dump and dragging the stowed canvas-work, dinghy and sails out on to the deck. Most of the many electronic bits and pieces that contained AA or AAA batteries had been destroyed as the batteries had leaked. Large supplies of canned foods that were expected to survive an apocalypse were also looking ready to leak and similarly had to go. Living aboard a boat on the hardstand is not so much fun, mainly because the toilets, showers and washbasins can’t be used. Plastic bags and empty water bottles save some trekking to the toilet block.

H was back in Corfu on the Sunday, and I drove up to Igoumenita and got the ferry to Corfu port. The trip takes about four hours one-way. I had lunch with H overlooking the same view near the airport I had the previous week. I got a hotel near the port and H sailed away in the evening. The next day I talked with some battery suppliers in Gouvia and got the ferry back to Igoumenitsa and Preveza. I had a small detour on the way back to the village of Ammoundia and the Akheron River that looked interesting from the road. The oil-pressure warning light in the car was beginning to flash from time to time. I hoped it would go away.

The warning light didn’t go away and so I took the car to Green Motion at Preveza Airport to be checked out. It turned out that the car needed oil due to drips from a cracked sump. I was fairly certain that I didn’t do it as I had only been on paved roads and felt no crunches but as there is no way to prove such a thing, they charged me €630 to have it fixed and I got a fresh car. The insurance claim is pending. There was more restoration work on Graptolite during the week and a mighty lithium battery bank of 600Ah was ordered from Germany. Then it was back to Corfu on the ferry as H was arriving in town the next day and I was set to join her on her next cruise. I dropped the car off at the airport and had a Covid test and moved into the Hotel Atlantis near the port. As a break from ouzo and moussaka I went to the fairly authentic, La Tabernita Mexicana near the New Fortress and had margaritas and fajitas for dinner.

I walked from the hotel to the cruise port early in the morning and boarded AIDAblu. H got us a nice suite with big windows looking over the bow of the ship. Departure, as usual, was on the Sunday evening. The big windows came in useful as in the early hours of Monday there was a “Super Blood Moon” lunar eclipse, and the ship was sailing in that direction. The eclipse itself was clear enough but the redness was washed out by the brightening sky and mistiness as the Moon dipped to the horizon. The red colour is apparently a projection of all the Earth’s sunsets and sunrises on to the surface of the Moon. Maybe next time.

After a sea-day, the next port was Grand Harbour, Valletta. We have been here a few times before, but it is always a dramatic entry. Our ship parked in French Creek, which is on the opposite side of the harbour from Valletta. We walked around the Senglea peninsular and around Dockyard Creek towards Fort St. Angelo and had lunch. On the way back H took a dip in her usual spot on the tip of Senglea while the enormous Norwegian Escape cruise ship slowly squeezed passed her into the harbour.

The next port was Catania, on the east coast of Sicily and on the lower slopes of Mount Etna. Time did not allow for a visit to stare down into the smouldering Etna crater or see the lights of Taormina further up the coast, but we plan on doing those on our next visit. I scouted out old Catania in the morning and returned in the afternoon with H. The edited highlights were the Basilica Cattedrale Sant’Agata in the Piazza Del Duomo with the amusing Fontana Dell’Elefante. The Pescheria di Catania, fish market and the Teatro Romano, amphitheatre. The morning was noisy and bustling but by the afternoon siesta time the market had closed leaving only a fishy smell and bolted church doors.

The next port was planned to be Crotone, Calabria but the weather did not allow it. The last time I was in Crotone was 1978 as a snivelling young geologist pining for hearth and home. I was there to board my first ever semi-submersible drilling rig. The nostalgia will have to wait for another time.

After another day at sea, we arrived in the Greek harbour of Katakolon. Pretty, but not much there. The main reason for stopping here is the ancient site of Olympia about 40 minutes away by bus. I’m sure it was once impressive, but earthquakes over the centuries have reduced the temples and sporting buildings to piles of rocks. The museum has some good stuff in it.

Another overnight sail put us in Argostoli. At first it seemed like a sleepy place with big lazy turtles swimming in the harbour. After walking towards the sound of a marching band, I found myself watching every uniformed and costumed organisation in Kefalonia parade through the streets in front of some local dignitaries. No idea was the event was for.

We ate an eight-course dinner in the fancy restaurant on board. The morning saw us back parked up in Corfu. 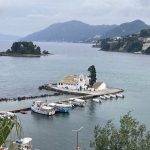 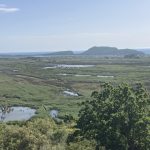 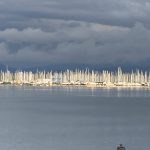 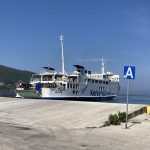 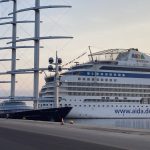 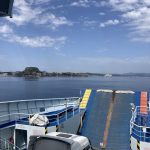 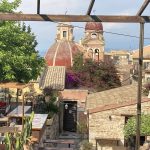 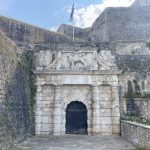 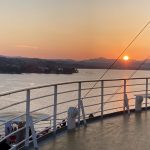 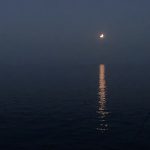 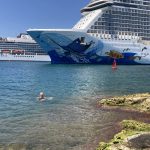 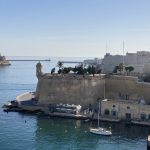 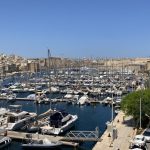 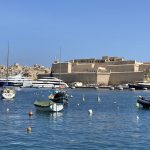 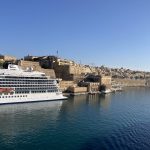 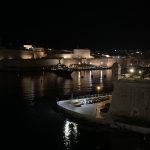 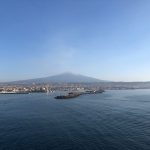 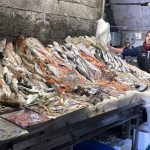 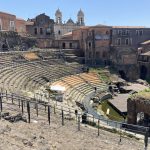 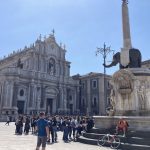 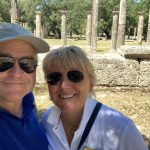 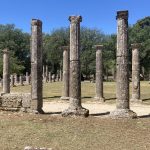 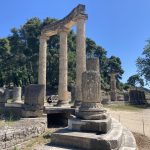 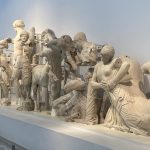 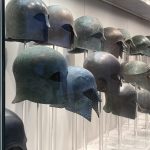 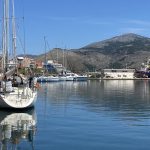 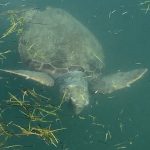 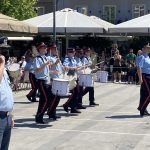 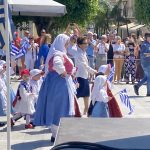