After 10 days putting a new roof on the carport I was ready for a rest. Collected Roland from Neukölln and we got an early train from Berlin Hbf to Hamburg Altona. We were met by H at the station and a short taxi ride to the ship. We had a nice 6-course dinner as we had an evening sail down the Elbe to the North Sea.

After a day at sea and we arrived at Bergen. It was a sunny morning. We got the Floibanen funicular railway up the mountain for the usual view and had soup and a snack. Then it was a quick look at the touristy fish market. I still shudder remembering the really the bad food poisoning I got from some shrimps I bought off the back of a fishing boat there 40 years ago. It was not so touristy then.

Geiranger Fjord is an impressive place and especially on a sunny day like this one. Although it is rarely worth the effort to go ashore in this kind of place as they are usually very overcrowded with tourists drooling over wooden trolls and reindeer skins. We took the tender-boat in anyway because who can resist trolls and reindeer.

There was a light atmospheric mist in the fjord which looked quite good on camera but I suspect it was probably trapped smog from the funnels of the three big cruise ships in the area. It can’t be long before the port authorities start permitting only LNG-powered ships to cruise these parts.

There was a brief stop at Hellesylt near Geiranger and then overnight it was back out to sea and back into another fjord system.

The morning stop was in Andalsnes. As a small town it seems to specialize in climbing equipment shops and there is even an indoor climbing wall near the harbour. on this type of trip there is no time to see the real outdoor climbing walls.

In the afternoon we were off again weaving through fjords and islands to Molde. I was last in Molde in June last year as a surprise visit to H’s ship as she was working on her birthday. I drove up from Bergen which seemed like a good idea at the time but it turned out to be a journey of endless tunnels and ferry crossings. Molde holds no particular attractions, without renting a car, so we stayed on board.

Somehow this day I was persuaded to dress up as “Dodo”, which is one of the ship’s cartoon-like children’s entertainer characters, and wander around waving and grinning inside a giant orange head while being photographed with children clinging onto my giant blue shoes. it was one of the more claustrophobic and sweaty experiences I’ve ever had. The pictures say it all.

We had a taxi ride through this small town and admired the old wooden houses, warehouses and public buildings. We did a little shopping. Roland and H had a little dance in the street accompanied by a busker playing the piano accordion. Then we had a coffee and back to the ship.

Roland and I took a bus trip around Ålesund. There are spectacular views over the islands from the mountains surrounding the town. The town centre is famous for its Art Nouveau architecture. There was a fire in 1904 which destroyed almost all the town and the town was entirely rebuilt in this style between 1904 and 1907. After the fire, Kaiser Wilhelm II of Germany sent several warships with supplies and building materials to help. Maybe Kaiser Bill wasn’t entirely a blot on the early 20th century.

In the afternoon I was once again recruited as Dodo, the orange ship’s mascot. The head is horribly hot. There were hundreds of children on the pool-deck that all wanted photos. I also made a tombola prize draw which is not easy when you can only see through some mesh pretending to be a Dodo mouth.

A spectacular sail up the fjord in the sunny early morning. In the town we took a walk up to the old church.

We ate lunch in the sunshine outside the Skagen Restaurant. A place that didn’t seem to me to have changed all that much over the last 40 years. Then we were off to the heliport as H had organised a grand farewell surprise flight over Lysefjord and the famous 604-metre cliff viewpoint of Preikestolen. Even though it is a good stiff walk of several hours from the nearest carpark, the top of the rock was thick with people. A helicopter means you can’t spend much time soaking in the view but at least you don’t have to jostle with the hoi polloi.

As sea day tomorrow and a return to Hamburg and then Berlin on 18th July. 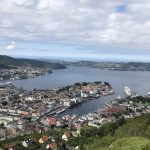 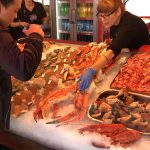 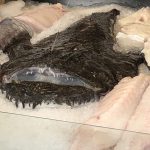 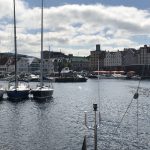 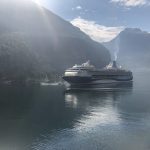 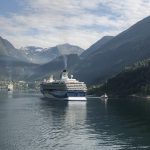 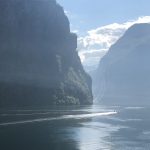 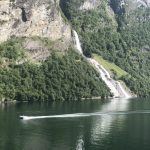 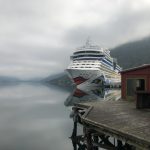 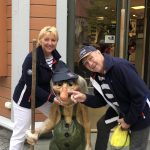 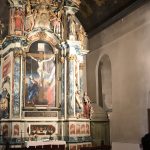 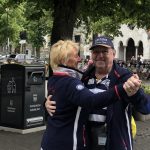 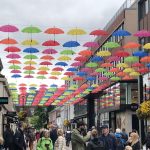 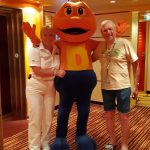 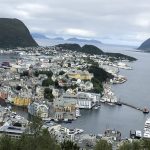 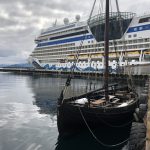 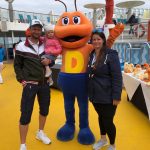 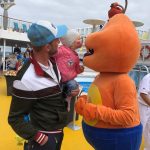 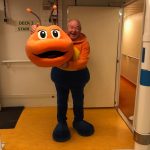 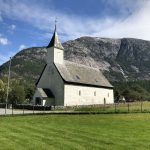 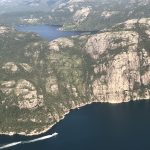 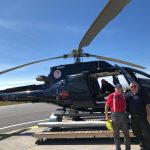 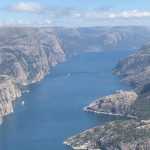 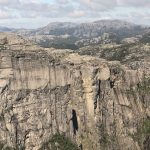 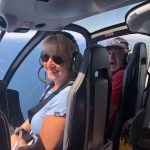 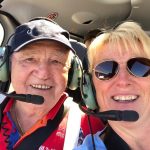 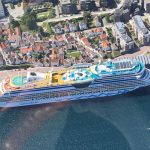