I drove to Hamburg airport to collect H who had just flown in from Norway. The weather was nasty with heavy rain the whole way. Drove on to Rostock arriving in the early hours. Rostock is a frequent place for us to visit as H’s head office is in town.

Still raining. H had meetings so I amused myself walking the medieval city wall and ramparts south of Kröpeliner Tor. Trying to keep dry, I stumbled into the Universitätskirche and watched an orchestra rehearsing for a Tschaikowski/Dvorak concert that evening. Rostock University is 600 years old this year and it was probably something to do with that. Also later, still trying to keep dry, I wandered around the Kulturhistorische Museum. There were no labels in English but it was free so I can’t complain.

I quite like Rostock. It was the main port on the Baltic Sea for the former GDR. Mostly due to neglect and lack of much destructive development over the four decades the communists were in charge, you can still get a sense of the pre-war (WWII and even the 30-Years War) character of the place in some areas.

I drove out to Warnemünde for lunch and had my usual Fischbrötchen. Smoked hallibut on a bread roll this time. I upset the local seagulls by not leaving my food unattended. They are old enemies and they know if they make any wrong moves they get a slap from me. I wandered out on the seawall and down the beach with its row on row of Strandkörbe. These are basketwork seats that fill the beach-hut niche in this part of the world.

It was a nice sunny day so I walked down the shopping street of Kröpelinerstrasse to the Marienkirche (St Mary’s Church). It’s a very big brick Gothic church built the 13th century. An interesting place. Inside is an enormous 15th century astronomical clock which is still in ticking order and has lots of moving parts. Feeling a bit multicultural I had a falafel sandwich for lunch in the market square then walked more of the city wall to the east out to the Nikolaikirke. 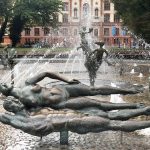 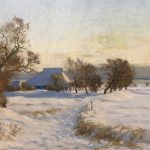 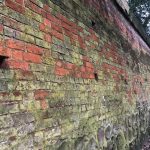 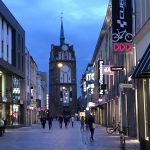 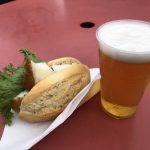 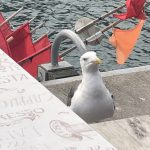 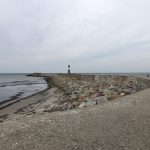 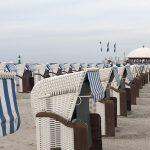 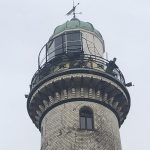 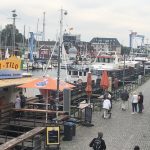 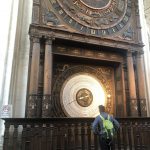 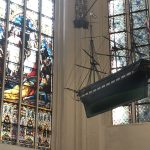 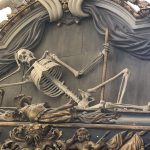 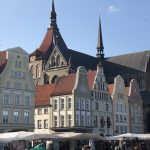 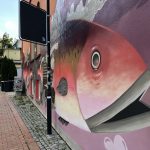