Love in the Time of Corona

Well this kind of thing really messes up a travel blog. Maybe forever, who knows? We had extensive plans for the summer with many airline tickets and marina berths booked and paid for. The plan was to spend some time on our own boat in the Ionian Sea area, based in Preveza or Corfu. H was expecting to be based in Venice and on weekly cruises up and down the Adriatic. There would have been a weekly rendezvous with H in Corfu, friends would have visited and sometimes I would have berthed our yacht and boarded the big ship for the Adriatic circuit. As it is, it doesn’t look like Graptolite will get her keel wet this year at all and H may be managing a hospital ship on a voyage to nowhere.

Most years we get to visit 25-30 different countries but in 2020 all this has ground to a halt with a mere nine countries seen up to the mid-March shutdown. It will be tragic, for us at least, if not the environment, if it has to stop now but I feel very fortunate to have been able to explore most corners of this blue planet already.

So, the beginnings of COVID-19 lockdown for us was probably he same as for everybody else. From 17th March onward, we did a bit of, what Berliners call, Hamsterfahrten which is a wartime thing meaning to get out of the city looking for food supplies. We got some survival stuff by picking over the partly empty shelves at our local Cash & Carry. Most of it seems to be stuff we never normally eat and I will be happy if I can throw it away unused after 10 years.

On the 24th March, I came down with a high fever. I waited for deadly breathing problems which never came. I was congratulating myself on getting off lightly and thinking about volunteering for something requiring immunity when I turned bright yellow. H knows a lot of senior medical people in Berlin as a number of them have worked as Schiffsärzte on cruise ships and by 26th March, after a bit of light string-pulling, I was in the Havelhöhe Krankenhaus in a large private room with a balcony overlooking the Havelsee. H was able to share my room to do essential translations for me while normal visitors were limited to shouting from the hospital grounds. My part of the hospital complex was very quiet as many people seemed to be staying away. Other parts of the hospital complex were being geared up for COVID-19 but as far as I could see these were also quiet. The hospital was formerly a training camp near Gatow airfield for the rebuilt Luftwaffe after WW1. They had a nice practice run by bombing Guernica in support of Franco during the Spanish Civil War. Gatow was also the airfield used by the British after the war and it was also close to the Havelsee where Sunderland flying boats landed to aid the Berlin Airlift. The former flying boat refueling station is now a marina and is just over the wall from the hospital.

On investigation it turned out that I had a blocked bile-duct which had already resolved itself but needed two days of scans and endoscopy to make sure it was not something more nasty. I’m waiting now for surgery to get my gall-bladder removed. It seems to be mostly on the grounds that nobody really needs one anyway and the Germans are a tidy people.

On 31.03.2020 I got wheeled into surgery. It’s an interesting process to remove a gall-bladder which fortunately I was not in any state to watch. They make three holes in your belly. One for a camera and two for other tools then they blow you up like a football and get snipping. I was told that during the surgery I was likely to be the only person in Berlin using a ventilator as COVID-19 has not got going here yet.

We have a bird-feeder on the balcony which attracts bluetits, coaltits nuthatches and spotted woodpeckers. We expect to leave here 03.04.2020 unless I can come up with some other medical problem so we can stay. 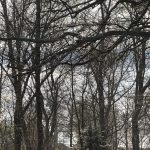 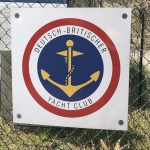 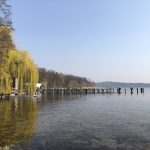