H returned to Corfu in late May and I needed a break from boat-repairing in Preveza so I jumped back on board H’s ship for a week’s cruise into the Aegean Sea, calling at Santorini, Chania, Kusadasi, Piraeus/Athens and back to Corfu.

The archaeological museum on Santorini, where they keep the famous Minoan frescos, was irritatingly closed on the Tuesday we were there. The chairlift from the dock to the town had a waiting time of easily over an hour so we walked up the donkey-poo-caked path to the white and blue town on the clifftop. We gave the donkey-riding a miss as it seemed a bit mean to expect these gasping and wheezing creatures to haul fat tourists up such a steep hill so we did the gasping and wheezing all by ourselves. We found a nice restaurant for lunch with an aerial view of the ships below. A highlight was sailing out of the Santorini caldera at sunset in the ship’s private wellness suite with sauna, hot tub, waterbed, fruit and prosecco. We did the same trip in our own boat some years ago but I can’t remember if we had fruit or not 😉

Next stop was Souda Bay, Crete which is just a short bus ride into Chania. Crete, of course was also home to the Bronze Age Minoan culture but there is not a lot to see of it. The main attraction in Chania is the 17th Century Venetian harbour, fortresses and city walls. And also the very crowded restaurants by the harbour where we had yet another lunch. Grilled sardines in my case. H didn’t study zoology at university like I did so she tries to avoid eating anything with a face.

Kuşadası, Turkey was a bit disappointing but we didn’t take the usual trip to see Roman ruins at Ephesus as we had done it some years ago. The old town would only be perfect if you went there to buy a leather jacket, shoes or a tattoo but otherwise it is just an annoying shopping experience with no prices on anything and shopkeepers shouting at you from doorways in classic Grand Bazaar style. There is an impressive Ottoman caravanserai in the middle of town.. There is supposed to be a hotel there but it is not obvious and I walked through the courtyard in the middle thinking it just an empty shell. We lunched in one of the few waterside fish restaurants near the port.

The next stop was the port of Piraeus and we took a taxi into Athens intending to go to a roof top restaurant with stand-on-chair glimpses of the Parthenon. On the way we let our taxi driver talk us in to going to another restaurant he knew. Oh! yes we did! A modest place called Strofi Athenian. It turned out to have fabulous traditional Greek food. My main course was baby goat in a paper bag. The view from our table was a close-up of the Acropolis that you don’t get even the most expensive hotels in town.

A sea day back to Corfu and then I caught a ferry to Igoumenitsa on the mainland, rented a car and drove south to Preveza for another couple of weeks of boat repair in the blazing Greek sun. H is touring the Adriatic Sea next. 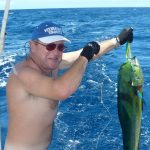 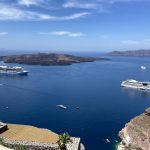 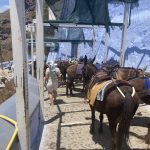 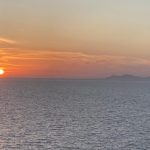 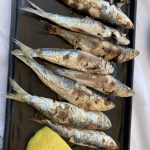 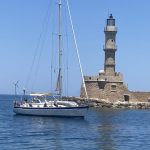 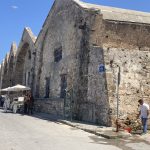 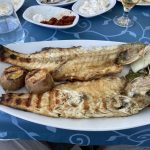 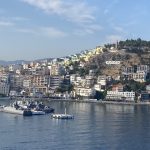 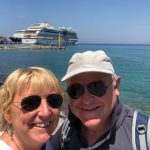 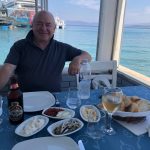 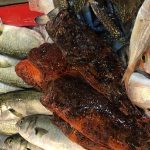 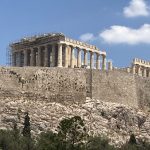 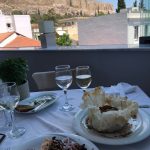