Norway-Überraschung on the Atlantic Road

Heike had a birthday this year while away working up and down the Norway fjords.

As a surprise, I thought I would be on the dockside in Molde as her ship pulled in. I took a flight to Oslo and then Bergen. Got an hotel overnight then drove a rental car to the town of Molde. It was a bit further than I expected with the drive over 450 km. The road is fabulously spectacular during the rare times it is not in a tunnel. There were three car-ferries as well as it is very fjordy country.

After eight hours I arrived in Molde and had another overnight waiting for the ship to arrive. Heike was suitably impressed although the ship security being what it is I had to phone Heike first to get anywhere near the dock which took the edge off the surprise a little bit. As a shore-excursion we drove north across a string of bridge-connected islands known as the Atlantic Road which leads to Kristiansund and had lunch in a restaurant at the end of last bridge. I’m embarrassed to say we had some whale-meat. As I recall, it was the only thing they had on the menu. I won’t do it again though.

I got to travel on the ship back to Bergen. 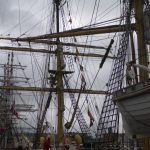 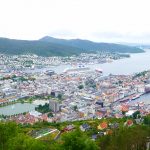 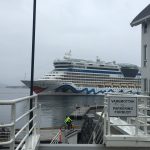 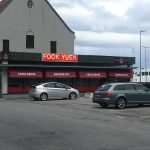 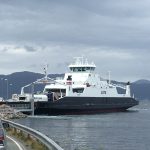 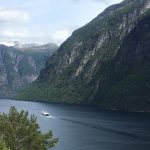 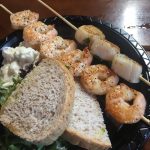