A Few Places in Europe.

We flew to Brussels to deal with some stuff related to a former business of ours. While we were there I got in touch with Cousin Mike who lives near Antwerp. I’ve not seen Mike for many years when he was by chance flying a plane I was on between New York and London. I asked the flight attendant to pass a message to the Captain which caused a moment of panic for her. Mike let me sit in the cockpit as we landed. It was all a long time ago and this treat is almost certainly banned now.

Or “Czechia” as they want the country to be called now. A day trip to Prague by car from Berlin. South of Dresden there is a mountainous area called “Sächsische Schweiz” (Saxony Switzerland), and the same countryside over the Czech border, which you need to cross. They are just small mountains but very pretty at this time of year with green, red, orange and yellow leaves. We were in Prague for just a couple of hours for minor medical stuff so we didn’t see much of the city.

H was back to work on the 10th and I had a few days in Berlin attempting to clear up leaves. Then it was off to Merry Old England to see mum and dad and take care of a few jobs for them. My guess is England is not going to be so merry post-Brexit when the Empire finally disappears forever into the bleak gap between the large world trading-blocks. There is still hope the whole ill-advised exercise might fall apart but to be on the safe-side my permanent residence permit (Niederlassungserlaubnis) for Germany is on its way.

On the Sunday I volunteered to be a taxi service to church which due to a misunderstanding turned into me actually having to take a pew. This is certainly not my thing for all kinds of reasons but, for a short while at least, I can resist the mind control techniques that have evolved in the Presbyterian and Congregational Churches over the last couple of thousand years. The event begins with droning, chanting and standing up and down to soften up the very elderly crowd. Then comes the pièce de résistance where there is ritual cannibalism with some wine and bread followed by the extortion of money. Then the reward of tea and biscuits. All good stuff and it works every time.

Dinner with friends, Johnny and Alison in the Spread Eagle in Mellor https://thespreadeaglemellor.com/, on Tuesday and then a flight back to Berlin on Wednesday for another dinner of a huge goose with father-in-law Roland and sister-in-law Marina. 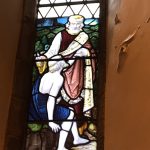 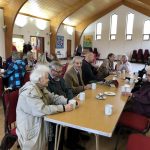 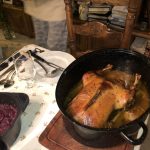 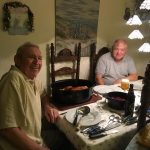